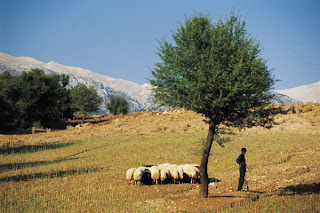 I've been through a lot of good times.  I've also been through some pretty rough times.  And in all of those times, it has never been difficult for me to continue to praise God.
One of the reasons?  I determined a long time ago that I would.  I pre-determined it.  No matter what happens, I will praise Him.  And I prayed and asked Him to provide the needed strength to do so, when the time arose.
I love the story of Hananiah, Mishael, and Azariah.  We know them better as Shadrach, Meshach and Abednego. (I don't know why we call them by their Babylonian names that are tributes to false gods instead of their Hebrew names that are tributes to the Real God.)  You can read it in Daniel 3.  They were commanded to bow to a giant idol and they refused.  Nearby was a huge furnace that had been used for smelting gold for the statue and the king told them they would be thrown in that fire if they did not bow.  They refused still.  And they said (paraphrase), "We know our God is powerful enough to save us, but even if He doesn't, we won't bow."
They predetermined - we will worship God if He intercedes on our behalf.  We will worship Him if He does not.  He is God, either way.
Most of us know the story of Job.  He said, "Though He slay me, still I will praise Him."
We maybe aren't quite as familiar with the story of Habakkuk, but it is a good one.  God had informed Habakkuk that He had raised a mighty and terrible army to come in and capture Israel because of their sinful rebellion.  In the end, (chapter 3) Habakkuk says:
"Even though the fig trees have no blossoms,
and there are no grapes on the vines;
even though the olive crop fails,
and the fields lie empty and barren;
even though the flocks die in the fields,
and the cattle barns are empty,
yet I will rejoice in the Lord!
I will be joyful in the God of my salvation!"
These were the things he was fearful of.  Yet, in spite of a bleak future, he determined he would continue to praise God.
In a Bible study I did, we were assigned these verses and asked to make our own list of "even thoughs".  What do you most fear or dread?  Make a list - "Even though.....Yet I will rejoice in the LORD!" There is no circumstance in which I will not praise Him.
Predetermine it.
Posted by Kay Day at 6:41 AM

Email ThisBlogThis!Share to TwitterShare to FacebookShare to Pinterest
Labels: praise