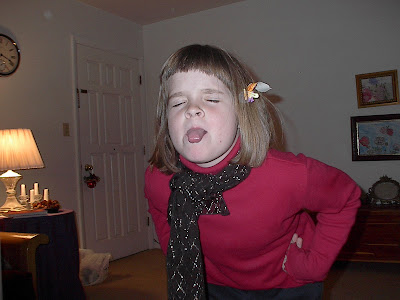 Can time stand still for just a minute?
When you first get your kids, everyone says how much time will fly and you think, (ok, I thought) "I wish!"  When you're in the middle of diapers and goo and spit up and crying, and later when there are tantrums and fighting and stubbornness and violence- against- mothers, and later...  well, it just seems like time can't go fast enough.
But here I am looking at the last day that my daughter will be a kid.  Starting tomorrow she is a teenager.  In some cultures, an adult.
Every older mother warns the new moms and every new mom ignores the older mother.  Time fly?  Are you kidding?
Well it has flew.
I find myself now, before it is completely too late, hanging on to the moments.  Savoring them.  Staring at my children and trying to memorize them.
It's like trying to catch falling jello.  You can't stop it.  But I will make the most of the time I have left.
And this brings up a pet peeve.  It drives me absolutely nuts when I mention having a teenager and other moms give me all these condolences and warnings.  Ok, maybe once again they know what they're talking about.  But on the other hand, it isn't very positive or encouraging.  Surely there are positive things about teenagers that people could focus on instead.  It's not as if I have any choice in the matter.  I will have to parent teens.  So can't those who've gone before encourage and cheer instead of shaking their head and tsking?
When I know a pregnant women, I don't tell her how dreadful labor will be.  When I see a woman with a two year old I don't give her horror stories about 3 and 4 year - olds!
Anyway, enough of that.
I am looking forward to the coming years.  I am eager to watch this amazing child develop into a grown woman.  I am fascinated by her and even though we are already seeing changes -- more time in her room on-the-phone, attitudes, etc -- they are a natural progression of independence.  All she's doing it trying to grow up.  And I really have no choice but to let her, even though I sometimes want her to be the cute little tyke she used to be.  There's no going back.  Forward Ho!
Posted by Kay Day at 10:20 AM