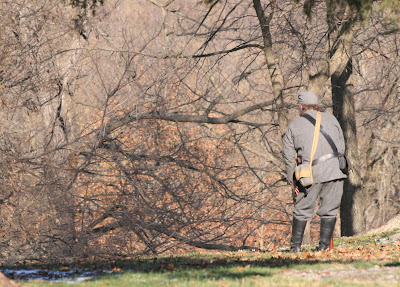 The purpose of retreat in military terms is to get yourself together. Regroup. It has a bad connotation I suppose: running away.
But I think sometimes we have to run away. We have to go to a safe place and examine our resources, evaluate our strengths and weaknesses, tend to wounds, and gain sustenance.
This weekend I went with six other ladies on a WAAWG. A Weekend Almost Alone With God. A local ministry called Caleb's Heart Ministries hosts these for men and for women separately.

We drove to the Franciscan Retreat Center in Colorado Springs where we each checked into a private room. We met for some worship and encouragement.
Then we went our own ways. Alone. With God. Some wandered the beautiful grounds in spite of wind and low temps. Others stayed in their rooms. We prayed, sang, danced, knelt, lay prostrate, read Scripture, wept, wrote, made art, fasted, feasted and napped with the Lord.

I learned how to pray with my eyes, nose, feet, tears, and repose.

It was refreshing, filling, and healing. And it was much needed. God has been gently urging me to come away with Him for years. Other than basic procrastination, I'm not sure why I haven't before now. It will definitely be a routine part of my spiritual life from here on out.

God met me in secret places I didn't even know existed. Revealed wounds I didn't know I had. Showed me answers and gave me new questions. He spent time with me.
The photo was found at morguefile by the photographer taliesin.
Posted by Kay Day at 8:50 AM 3 comments:

The other day a book caught my eye in the kids' section of the library. It is called Twelve Impossible Things Before Breakfast by Jane Yolen. It was the title that captured my attention. I am interested in impossible things.
The phrase sounded familiar, but I wasn't sure why. I brought the book home.
Then, for my birthday, a friend and I went to see the new version of Alice in Wonderland. The theme of the movie was believing the impossible. Alice had been taught to "believe as many as six impossible things before breakfast."
That's where that phrase came from. Jane Yolen, in writing a collection of fractured type stories, chose to double the number of impossibilities believed each morning.
This really stuck with me. Usually when I see a theme or idea repeated, I pay attention. God usually is trying to tell me something.
See, I have an entire section of my mental prayer list that is labeled "Impossible." I pray for those things now and then, but it often seems futile.
You know, the situations: physical problems, economic problems, emotional problems. Things that look too big, too constant to ever change.
And people--the people who never change. People so deeply rooted in sinful lifestyles or broken behavior patterns that you've never seen any growth in them.
I know that speaks poorly of my faith. I know that "nothing is impossible for him who believes." And that nothing is too difficult for God. But this is one of those cases of believing something with my head, but not so much with my heart.
Time to get it into my heart.
So I've decided to start believing the impossible. I try to think of at least six each morning. And as I say, "Lord, I believe that you can change_____'s heart." I also say, "Lord, I believe, but help my unbelief."
Are you believing the impossible? Maybe you always have. Or maybe you're like me and have a little section of prayer requests that are labeled "Impossible."
Posted by Kay Day at 8:21 AM 2 comments:

You know, Christ was still walking around on the earth this many days after the Resurrection. In fact, He stuck around for forty days.
I've been thinking about that.
In the Bible the number forty generally has to do with times of trial or testing. Perhaps discipline.
The rains fell forty days and nights during the flood.
The Israelites wandered the desert forty years.
Moses lay prostrate before God, fasting and praying, forty days on behalf of Israel.
Goliath taunted the armies of Israel forty days.
Jesus was in the wilderness, fasting and enduring temptation, forty days.
There are a couple of times that the aspect of suffering or trial doesn't seem to fit:
Moses was with God on Sinai forty days while he received the law.
David and Solomon each ruled Israel forty years.
I'm not sure what Christ's last forty days signifies. He walked among us in His glorified body. He must have been ready to move on. Short-timers syndrome. But I can't see why He would need to sacrifice yet more. Or go through anymore trial. Maybe it was related to his Kingly reign, as David reigned. Or perhaps it coincided with the initiation of the first Covenant when Moses spent forty days with God.
I don't know. And I have no application. It's just something I've been contemplating. If you have any insight, I would love to hear it.
Posted by Kay Day at 11:33 AM 6 comments:

We've commemorated much this week. But this day, the one with no name that I know of, is the day that resonates with me the most.
When you're in the midst of high emotion you are too busy feeling to think. This had been that kind of week for the disciples.
Sunday was elation with a tinge of victory as Christ entered the city to accolades. Thursday started with the joy that accompanies a holiday, but ended in fear, anger, and grief.
Yesterday... Friday it all fell apart. Finally and irrevocably, or so they thought.
But today marks the day all the adrenaline was gone. No emotions to carry them through. It's that stunned afterwards. The in-between.
We all hate waiting. We hate not knowing. I'm sure the disciples were asking themselves, "What now?" Where could they go. What should they do?
They must have still been frightened. They must have been in denial, looking to one another for confirmation that it hadn't all been a horrible nightmare.
I can picture the scene so clearly. The glazed expressions on their pale faces.
We've all been there. Sometimes it's the death of a loved one. A bad diagnosis. A phone call from the police or the hospital. The discovery of betrayal or a broken relationship.
We sit. We think. We wait. And we don't even know what we're waiting for... a miracle? Waiting for it to all go away? For life to go back to normal?
A miracle is coming. It may not look like we expect. It may bring as much confusion as it does answers. We may not even recognize it. But God is a God who redeems. It's what he does. He brings new life. He makes old things new. He restores.
This is a day where hopelessness reigned, but it wasn't the end. It's never the end. Just wait to see what tomorrow brings!
I've posted in the past about Good Friday.
I've posted twice before about this day, Saturday--here and here. The photo is the same, don't let that confuse you.
Posted by Kay Day at 8:54 AM 3 comments: