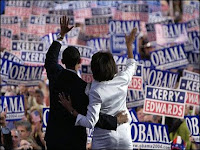 I guess everyone knows that we are having the Democratic Convention here in Denver this week.  If you are interested in that, my friend Jan at Bold and Free is actually participating and sharing on her blog.
I really am not interested in Politics.  I was a little more interested earlier in the campaign when there were some choices.  But now that it's narrowed down to bad or worse, well... I'm just tired of hearing about it all.
I'm not an anarchist or anything.  And no matter who the President is, I don't like all the jokes and crude stuff that's out there.  I think the position itself warrants some level of respect.  Seems like that's been lost.  Sure we are free to say whatever we want, but I think the general attitude about the Presidency is kind of sad.  I don't know how many people use that as the ultimate of possibilities for their kids anymore.
I am thankful for our freedom and for our voice.  I am so grateful that I can vote and I do vote.  I just don't particularly want to talk about it, or hear about it, or watch it on TV.  That isn't interesting at all to me.
I would like for it to go something like this:
Here are the candidates and here is where you can get info about their history - what they've done, where they stand.  Then nothing.  Shhhh.  Just leave us alone to think about it. No more campaigns.  It's all based on what they've done, not what they say they will do.  Then it's vote day.  Silence.  Nothing until all the votes are counted.  Then they announce the winner and we go on with our lives!  That would be cool.
Posted by Kay Day at 7:36 AM