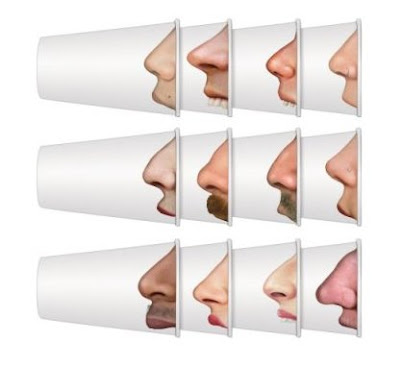 I like noses.  I have been known to sit and admire noses.  If you catch me looking at you, I might just be studying your nose.
But it seems that most people don't like their own noses, (nose?).  I don't really like mine.  I don't hate it, but I don't love it.  It is crooked and has a funny little blob on the end.  Yet, one time I met a girl and the first thing she said to me was "You have a cute nose."  Cracked me up - still does.
I've heard other people say they dislike their nose and usually it's a nose that I've been admiring.
My cousin Q has a nose that I really like, and yet, small children have said rude things about her nose.  I guess it's all relative.
I like noses with personality.  Long straight noses are nice.  I also like roman noses. There are many perfectly good noses that don't catch my attention.  Too run of the mill.  Little perky noses are likely to go without my notice.   I like a nose that makes a statement.  Not sure what that statement would be...
What about you?  Do you like your nose?  Do you hate it?  Or is it just something you live with?
Posted by Kay Day at 7:27 AM