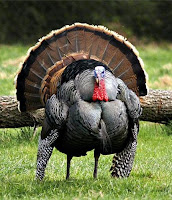 We had:
25 pounds of turkey, which, for the first time since I started using the bags, came out dry.
cornbread stuffing made by QOTW
Organic stove top type stuffing with cranberries in it made by me
mashed taters and gravy.  Homemade gravy made by momstheword.  I made the taters
green bean casserole by QOTW
broccoli cauliflower casserole by QOTW
sweet potato goo with marshmallow stuff made by momstheword
cranberry sauce
veggie trays
relish trays
devilled eggs
rolls - all brought by my anonymous aunt
corn - I warmed in the micro
4 pumpkin pies my son and I made
2 apple pies my cousin once removed in-law made
a gooey delicious oatmeal cake my lurker aunt made
pumpkin puff cookies my anonymous aunt made
Iced tea and coffee.
It was delicious.  It was way too much food and a lot of fun.
My cousin the QOTW dug though some old stuff that had been my grandmas.  It was like looking through treasure.
I have a bunch of old pictures that I am going to scan into my computer and will share some of them with you in time.
I am appalled and horrified about the Walmart worker who was trampled to death by greedy people trying to save a few bucks yesterday.  Absolutely sickening.  And heartbreaking.  What is wrong with people that saving a few bucks means more than a human life?
My cousin Jen has put some diary entries on her blog.  Very cute.  Inner voices of a Spinster in the making is her blog.  I'm too tired to do the link - it's on my sidebar.  I'm thinking I might dig out my old diaries and see if there's anything I'm not too embarrassed to share.
My hubby and I celebrated our fifteenth anniversary this week!  We had a couple of kid-free days thanks to grandma (momstheword) and some sleepovers.  Now we're all together again, and it's nice.
We will do our Christmas decorating tomorrow!
Posted by Kay Day at 4:58 PM