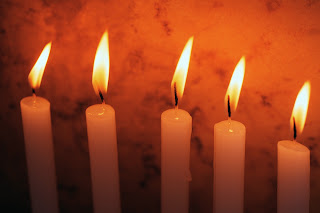 I am re-posting from last year.  I think perhaps there are some of you who didn't read it then.  To those of you who did, my apologies for the repeat.

The history of Hanukkah as I understand it is:

After Alexander the Great died, the Greek empire split into three dynasties; one of which was the Seleucid Dynasty. One of the rulers in this dynasty was called Antiochus IV Ephiphanes. He was so evil that the Bible, in the book of Daniel, uses him as an example of what the Anti-Christ will be like.

He desecrated the Temple of God. The Bible calls it the Abomination of Desolation. He made the Israelites stop their daily sacrifices and sacrifice to other god's instead.

One day when an Israelite made one of these sacrifices a godly man named Matthias killed him. He started a revolt in which the God-fearing Jews went throughout the land tearing down false idols and killing those who worshipped them. It was a time of purging for the land of Israel.

When Matthias died his son Judah took over. He is known as Judah Macabee. These Macabees went into the Temple to purify it after Antiochus had profaned it. They cleansed it and re-dedicated it to God.

The lamps in the Temple were to burn continually. But when they rededicated the Temple, there wasn't enough oil to last for more than a day. They miraculously continued to burn for eight days until more holy oil could be obtained.

There. I find some very significant stuff for all of us to think about. Purification. Rededication. We can't go wrong spending some time dwelling on that this Season.

And the Light will never go out.