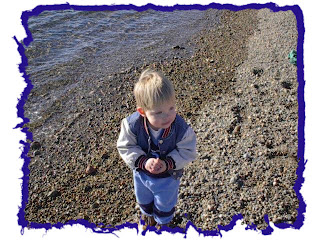 You have probably already heard the story.  It made headlines around the world and was on the morning shows, etc.  I am not a watcher of news programs, so I didn't know anything about it until I was perusing a Reader's Digest at the salon the other day.  A woman let her nine-year-old son ride the New York subway -- ALONE.  You can read the story from the mom's perspective here.
Her site is very interesting.  And I agree with her in many ways.  She speaks to something in me... something that wants my kids to experience that kind of freedom.
It goes against everything I've been taught, though.  My dad worked for a time with the criminally insane.  He's worked with abusers and murderers and abductors.  So, he wanted us to be safe.  Yet, even so, I remember walking or riding my bike to the store down the street.  My friend and I would walk to the nursing home near her house.  My biggest thrills came when I was able to venture out beyond the normal boundaries.  It is empowering and courage building for a kid to be able to go out alone and live to tell about it.
We want our kids to be safe, though.  But our parents and grandparents did, too.  And is keeping them safe supposed to be our entire purpose?  What about teaching them how to fend for themselves a bit.  What about molding them into people who are self-sufficient enough to survive life?  I wonder if some of this mentality is why there are so many young adults still living at home?
The truth is, it's always been a dangerous world.  When there weren't child molesters around every corner, there was polio.  Kids have always been susceptible to getting hit by cars, falling out of trees or off their ponies.  On the one hand we complain (ok, I complain) that my kids are couch potatoes, but then, that's the safest place for them to be, right?
What am I teaching them by that?  This world is horrifying? Terrible?  That's not a very nice thing to do.  And you know what?  I don't know that it's really all that bad.  I think we just hear about every single incident that happens and it makes it seem like a lot worse.  Terrible things happen.  We all could tell of at least one case right off the top of our heads.  But isn't it better to really live and take a few risks than to spend your entire life avoiding danger of any kind and also missing out on life?
I am so completely talking to myself with this post.  This woman's article introduced a new concept to me.  And I don't even know if she's a Christian.  Shouldn't those of us with faith in a Huge, Loving God be the ones out there fighting off this culture of fear that has descended on us?
And where is the line between fear and prudence?  It seems people fall far on one side or the other -- being over protective or being negligent.  Where is the balance?
I know not everyone struggles with these things.  But as I mentioned, a lot of the people who don't overprotect their kids also don't really care about seat belts and helmets and keeping guns locked up.
This is a frustrating topic for me.  I want to talk about the fact that even bull riders seem to have fallen into this mindset, but that's for another post.
I would love to hear your thoughts about this.  What do you let your kids do?  What do you definitely prohibit them from doing?  I mean in terms of safety here.  Is this even an issue for you?  What do you think of the woman letting her kid ride the subway?
Posted by Kay Day at 7:16 AM