violence in the school 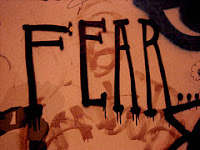 In my hometown, (small town) where my folks still live, there is a rumor that someone has written a hit-list and they plan to act on it at the graduation ceremony. Apparently the kid who did this has been told he is not allowed to attend the ceremony, but can get his diploma.

My mom's neighbor came over crying because it is her grandson who has been accused of this. Her whole family is terrified because they are receiving death threats and people are driving slowly past their house and her son's house. She told my mom if anything happened to her that she is ready to meet God. Asked my mom to let everyone know that.

So the community is terrified because of this alleged hit-list, (there is no proof that we know of) and so they begin to terrorize this family. It reminds me of the mob with the torches storming Frankenstein's Castle. Fear is such an ugly and dangerous thing.

My son is in third grade. There is a boy in there who has some serious problems and is under treatment, but still has outbursts of rage. He directs these at kids, teachers, parents, anyone. He has a couple of times become physical - with my son. The teacher is committed to the safety of her class and puts him out of the room when he loses control, but she can't do anything beyond that.

So what's a parent to do? Unfortunately, the world is full of people who have problems. People who are angry and violent. They will ever be with us and I am afraid that it will continue to get worse. I would love to just keep my kids safe in a protective bubble forever but that's just not realistic, or even in their best interest.

I could homeschool, but my only reason for doing so would be fear and I decided long ago that I do not want fear to motivate my decisions. Well, unless someone is breaking into my house. I might decide to crack him on the head with a candlestick, but that's different.

So as my children live and grow in this unstable world all I can do is let them go to the One who holds them in His hands. It just seems to require more faith to do so these days then it did for my parents or grandparents.
Posted by Kay Day at 10:08 AM