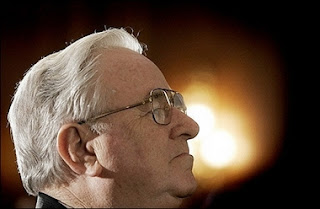 Regardless of your opinion of Jerry Falwell.... I'm sure you have one. Very few people are neutral about him, they either loved him or hated him. He was very controversial, even among Christians.
I for one, loved him. I don't think he was perfect. I haven't always agreed with everything he did and certainly not with everything he said. But I admired him. I spent six years at his university, Liberty. It is my Alma mater. I felt like I knew him after seeing him several times a week over all those years.
I believe the man was genuine. What you saw was what you got. I think he really lived out what he believed and he had the courage to stand for what he believed even when it was very unpopular. I think anyone should admire those things about a person.
He was a friendly, happy man. He had a great sense of humor. He was just a small town preacher who did big things.
I know that he was truly committed to God and to living his life for Him. Millions of people have been influenced by him one way or the other and a vast number have been turned to Christ by him or one of his many ministries.
So, regardless of your opinion of him, you will notice his absence.
Many, many people will miss him.
Posted by Kay Day at 3:26 PM