the boy in the striped pajamas 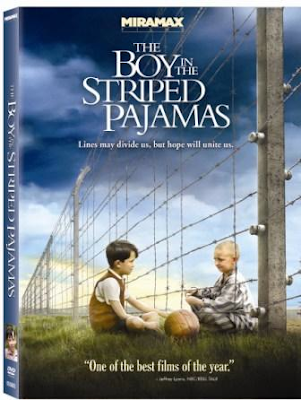 Last night I had some alone time. So I used it to watch some movies that my family wouldn't appreciate.
One of the was The Boy in the Striped Pajamas.
I want to talk about it.
So, if you haven't seen it, and you plan to, then stop reading now because I will spoil it.

Now you can't say I didn't warn you.

Ok, first I liked the way it was filmed. Did you notice how prison- like their new house was?
I liked the way you could see the boy thinking, processing. The actor who played Bruno did a wonderful job.

Childlike wonder and innocence. Believing the best. Or wanting to, anyway. Trying to decide what to believe, your father, or your own eyes. All of this played in his acting very well.

So, skipping to the end. As soon as he made his plan to go into the camp, I saw it coming. But still I kept hoping. I kept hoping and then it hit me.
His life has no more value than any of these others. Yes, I wanted his dad to find him in time to save him, but what about all those other people?

And isn't that the point of the movie?

I was thinking things like, "But wait, he doesn't belong there!" Or, "This isn't fair. He's not part of the camp." How many of us would have breathed a big sigh of relief if dad had rescued Bruno?

It was at the point when they were told to take their clothes off that I came to my senses. Yes it is unjust, but it's unjust for all of them. Every single one of them doesn't belong there. Every one of them needs to be rescued.

I would like to have seen the aftermath. It isn't hard to imagine what happened to their marriage. Did the father get the point, though, I wonder. Did he see?
Posted by Kay Day at 10:01 AM