while I've been gone 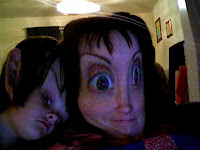 Since I wasn't allowed to blog, tweet, or facebook, I played a lot of computer games.
I also spent more time in the Bible and prayer.
I made a lot of progress on my book and it is now much shorter than it was. It works that way, I guess. But I have new direction and am excited about it. I did get some writing done, but mostly a lot of thinking and some plotting and rearranging. It's cool.
I got a diagnosis* for something that has been troubling me for more than fifteen years and no other doctor could help me with. I've also been getting treatments** for that diagnosis. One of which*** gave me a severe allergic reaction and I had my very first breathing treatment! Awesome.
My son got a diagnosis**** for something that's been bothering him since last June at least.
I wrote and submitted a story for Chicken Soup for the Soul and got a reply that it was being considered. Than another letter asking me to make any changes and sign off on it. That was the "one step closer" letter. I've not heard anything since then. I'm thinking they decided against it. I'm thinking it's been rejected. I don't care. Really. Sort of.
I wrote and submitted a short story for a contest that my writing group, Words for the Journey, is doing. The winner hasn't been announced yet.
I got a "job" as a writer for the Denver Examiner. I am the Christian Fiction Examiner. The reason for the quotes is that I get paid approximately $.01 per page view. So feel free to go check it out. I will mostly be posting book recommendations/reviews. You can also sign up for e-mail notifications so you'll know each time I post a new article.
I had a birthday.
I had some really cool times with God.
I had some hair pulling moments with my children and homeschooling.
I had a short season of depression.
I definitely missed all of my blog friends! I'm looking forward to catching up and hearing how your life has been the past few months.
I got this asterisk thing from my friend Susan at Accidental poet. I'm a copy cat and I'm not ashamed.
* Chronic Epstein Barr
** Frequency Specific Microcurrent, aromatherapy, and IV nutrition
*** IV nutrition - it is vitamins and minerals from whole food sources. Apparently I am allergic to one of the food sources.
**** Gluten Intolerance
Posted by Kay Day at 11:41 AM