how to get to denver from boston 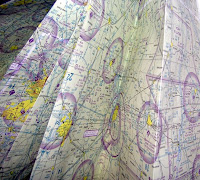 My husband had to make a business trip to Boston last Wednesday. Yesterday was the day he was to come home.
Yesterday there was a snow storm in Denver, (still snowing as I write, in fact).
So after hours in the Boston airport he finally took off for Phoenix. In airline world, Phoenix is between Boston and Denver. It's complicated and above our reasoning skills, so lets not try to comprehend that.
Then, with the snow still falling here, there was question as to whether his flight would be cancelled. It wasn't, but they did have to change gates and bring in a different airplane. Again, it's too complicated for us, so lets not think about it.
Then they finally started boarding. They were counting children because they wanted to be sure to not exceed the weight limit, (considerate of them). This made me feel a bit uneasy, but hubby seemed okay with it.
He decided though, that if they asked for volunteers to give up a seat he would do it. But they didn't ask.
Hours after he should have arrived in Denver he finally called. "I'm in Colorado Springs."
What? Why? Well, I guess they flew to a snowstorm in Denver in a plane that for some reason isn't able to land in fog. This is just so brilliant that I would need a couple of doctorates to even begin to grasp it.
"We're just sitting here in the middle of the tarmac."
"Why?"
"Apparently the airport is closed."
Nice.
Then they announced that they were going to re-fuel and go back to Phoenix. (Insert snark here)
I told him to "Get. Off. The. Plane." Those are crazy people. They won't let him off, he told me. No way can you go back to Phoenix when you are an hour from home, I told him. Then I suggested he start a riot so the police would come and liberate him from the plane.
He didn't go for it.
Then they said they would get the airport open, let them off and drive them to Denver on a bus.
Okay. That's something. At least it's a plan that keeps him in the state.
All they had to do was wait two hours for the bus to get there from DIA.
Did I mention that by this time it was 2:00 AM? So a two hour wait, a two hour drive, then at least thirty minutes more to get to our house. Good plan.
He decided to find a hotel. I told him I would drive down today and get him and take him to DIA to fetch his car. Better plan.
This morning, it was still snowing. At this point, the snow is above my knees in places. I wasn't sure I wanted to brave it. Turns out, I couldn't have anyway. No way would I get out our uphill driveway that is covered in a foot of snow. He decided to rent a car and drive up. Awesome plan.
So he did. And fortunately he thought to get the insurance from the rental company because he slid into a guard rail on the way up. It took about twice the normal time to get home, but he's home.
He did get stuck on our road, though.
Posted by Kay Day at 3:16 PM