When I learned about King Edward abdicating his throne I thought it was the most romantic story I'd ever heard.
Imagine, giving up the throne for the love of a woman.
Of course, during that time, the throne didn't really hold any power anymore. It was purely position, but still...

What if a king of old had done that? Back in the day when brother killed brother, son killed father, husband killed wife for the crown. What if a king had forsaken all that power, wealth, prestige and honor for love? Unheard of. 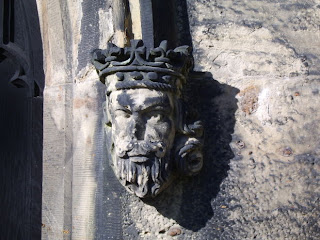 But then... isn't that what we're celebrating this month? A King who abandoned everything for love. For love of us. He shrugged off the royal robes, set aside the crown, and stepped down from a throne of untold splendor. For us.
Posted by Kay Day at 9:06 PM