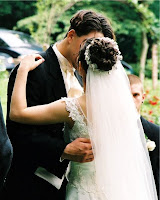 I read an interesting article this morning about a man who is having to defend his decision to get married at age 22. Apparently people think that's too young.
That used to be the average age for marriages.
Back when the divorce rate was lower.
I fully intended to be married by the time I was 25. I didn't get married until I was 27, though. Obviously, one can't just jump into it if the right person hasn't come around. And getting married for the sake of getting married isn't a good idea.
But, I'm personally not real fond of this trend to put it off longer and longer by choice.
I think that waiting adds to the difficulties of adjusting to life with a spouse. You've had more time to form your own habits, opinions, and independence.
You should read the article.
And tell me how old you were when you got married. What are the pros and cons that you see in your decision? And was it your decision? If you were older, was it because you deliberately waited or because it just didn't come together before then?
Posted by Kay Day at 2:08 PM

Email ThisBlogThis!Share to TwitterShare to FacebookShare to Pinterest
Labels: marriage