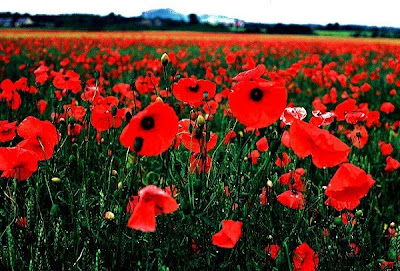 This is a re-post of something I wrote last year. I had WWI in mind when I wrote it since this date is the anniversary of the end of that war.

Only kissed a girl once. She gave you her picture. When it's quiet, you pull it out and look at it, especially when the other men are around. She's a looker.
When the other men aren't around, you pull out the picture of mama. You imagine her voice, telling you that everything will be alright. She reminds you to brush your teeth, no matter where you are. Eat your vegetables, you need to be strong. Stay warm. Don't let the others lead you astray. Read you Bible.
You tuck the picture back near your heart; pretend to sneeze so you can wipe your eyes.
Never been away from home before this. Some of the guys went to college, but you hadn't been out of Ohio. Now you hear people with accents so strong you have trouble understanding - the Scots, and Irish, and even the English don't seem to speak English. You hear French and sometimes - always bringing a chill - German.
Instead of the strings of crickets, the night music is percussion. And once, one hellish night, the air was filled with fire and screams and blood. Your best buddy lost his leg. Another one killed a German up close and personal and still has dreams about it.
You know it will be like that again. You know your turn for nightmares is coming. You look at the flag on your helmet, the flag hanging from a low pole, you think of mama, and you know. Whatever lay ahead, it's worth it.
Posted by Kay Day at 7:15 AM

Email ThisBlogThis!Share to TwitterShare to FacebookShare to Pinterest
Labels: military